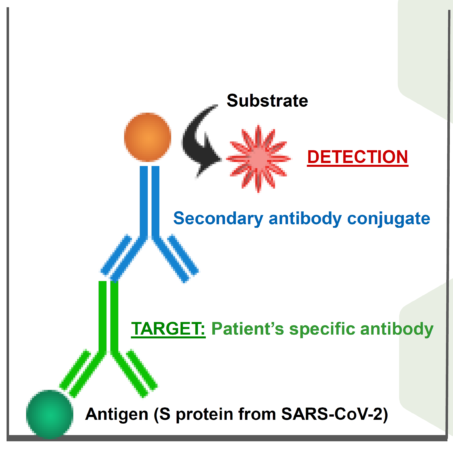 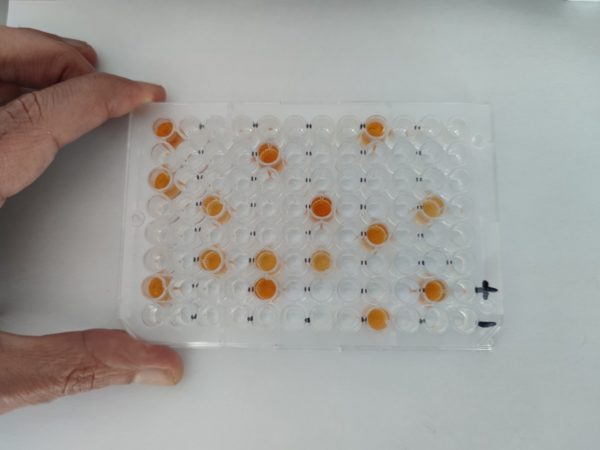 Development of an ELISA test suited for SARS-CoV-2 seroprevalence studies in the female and male populations of the staff employed at UPV and Doctor Peset University Hospital in Valencia (Ref. UPV-FISABIO-2020-A38).).

The world is going through an extremely serious health and economic emergency caused by COVID-19 pandemic. In this context, the availability of precise and reliable tests to follow evolution of the disease is undoubtedly one of the most precious elements to elucidate the complex dynamics involved in the progress of infection and the development of immunity against the virus that causes the disease: SARS-CoV-2. Two basic types of tests for monitoring the disease are commercially available: 1) Molecular assays for the detection of SARS-CoV-2 viral RNA, mainly based on the polymerase chain reaction (PCR), and 2) Serological assays, based on the detection of antibodies generated by exposed individuals. While molecular tests identify individuals infected with SARS-CoV-2 during the acute phase of infection, serological tests allow the identification of individuals who have developed antibodies against the virus. Therefore, serological tests constitute the basis of the seroprevalence studies in the population, which are undoubtedly called upon to play (in fact they are already doing so) an essential role in research, vaccine development and surveillance of the pandemic.The most popular commercial serological tests are the so-called «rapid tests», based on immunochromatography on dipstick, which detect the presence of antibodies against SARS-CoV-2 in human serum or plasma. However, these tests often suffer from low sensitivity and reliability. The best alternative to “rapid tests” are the ELISA microplate enzyme-immunoassays, a technique that has been applied successfully for decades in various fields of biomedical diagnostics. ELISAs have already reliably demonstrated their high sensitivity and reliability, also allowing a high number of samples to be analyzed simultaneously (up to 120 samples in 180 minutes), which confirms their suitability for large population samples, such as seroprevalence studies.Although there are already some commercial ELISAs for the detection of antibodies against SARS-CoV-2 in human blood products, the GENERAL OBJECTIVE of this proposal is the development of a new, in-house, reliable and highly sensitive immunological test for the detection of antibodies against SARS -CoV-2 in human serum. The aim is to facilitate seroprevalence studies against this virus, differentiating between sexes, in our closest population environments (the institutions that participate in this project).

• A wide range of commercially available immunoreagents (antigens and antibodies) have been evaluated for the detection of different types of antibodies generated against the virus causing the COVID-19 pandemic.

• Using the optimal combination of commercial immunoreagents, an ELISA test has been developed that allows detecting with high sensitivity and reliability the presence of antibodies against SARS-CoV-2 in human serum, generated by spontaneous exposition/infection or by vaccination.

• The developed ELISA has shown a 97% agreement with the reference analytical technique usually employed to detect the presence of the viral antigen (PCR). Moreover, this ELISA achieves a high analytical throughput with lower cost than similar commercial tests.

• A pilot seroprevalence study is underway, with the aim of analyzing approximately 200 serum samples from personnel employed in each of the institutions participating in the project